Plenty of, perhaps even most, composers have died leaving works unfinished. Schubert immediately springs to mind (8th symphony – even though he went on to write a 9th), but also Bach (Art of Fugue), Mozart (Requiem, C minor mass and multiple instrumental works), Bruckner (9th symphony), Mahler (10th symphony), Elgar (3rd symphony) and so on. Then there are works which are known to have existed but which have been lost: many cantatas and at least one Passion setting by Bach; four completed and three partially completed operas by Monteverdi; perhaps as many as thirty masses by Monteverdi . . . I could go on, but that’s enough depressing thoughts for one day.

But in our Jacobean Secrets concert we featured works which, tantalisingly, survive almost complete – with one or more voice part(s) missing, for instance (and perhaps I should immediately emphasise that we have filled in the gap(s) in a plausible and satisfactory manner – hence this blog entry’s title).

But how does this come about, you may reasonably ask? The answer lies in the ways in which music was circulated for performance in the years around 1600. Any published vocal music in parts (ie not a solo song) was issued in one of two ways. A choir book showed all the music for a motet/madrigal etc on a double page spread but with each part on its own group of staves, so soprano top left, tenor top right etc.. More common in England, however, were part books with all the soprano parts for a set of motets/madrigals in one book, all the alto parts in another book etc.. Some sets of part books are now incomplete . . .

In this choir book the illuminated letters mark the starts of each of the four vocal parts. 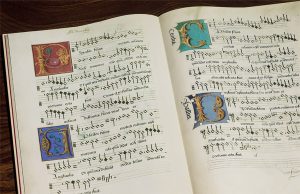 This page from a part book shows the tenor part of Tallis’s motet Salvator mundi. Fortunately, all the books in this set have survived. 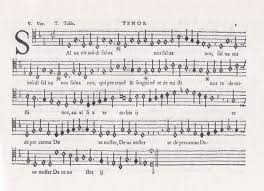 Even more vulnerable were pieces that were not published but which existed only as handwritten copies. In this case each voice part would be written on a separate piece of paper and it is only too easy to imagine how, over the years, one sheet may have become separated from its companions or otherwise lost/destroyed, meaning that, for example, only five parts of a six-part work survive. Half the Latin-texted motets in our programme have suffered this fate. But what remains is of such intrinsic musical interest and, in places, sheer wackiness that the considerable effort required to create a completed and performable version is more than justified.

Fortunately, the style of the music and the nature of what has survived at least makes the task possible. To cut a long story short, in Late Renaissance music each part sings more or less the same music but at different times and at different pitches. Two soprano parts will probably sing at the same pitch with the altos four or five notes lower and so on. So the work required is a mixture of musical analysis, jigsaw puzzle and crossword completion and, let’s be honest, trial and error. But Thomas Weelkes’s O vos omnes has emerged as absolutely brilliant and, as far as we can trace, Ripieno is the only choir planning to perform it in the foreseeable future.

And there’s Gibbons and Monteverdi too. But they’ll have to wait.