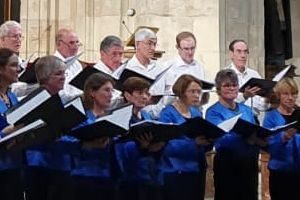 The Ripieno Choir’s repertoire is predominantly drawn from the Baroque and Renaissance periods, but programmes have included music from all periods – from plainchant to 21st century (see previous concerts). The choir often performs a cappella, but for larger works we are accompanied by a period-instrument ensembles or modern orchestras, and are joined by leading soloists.

Composers whose work the choir has particularly enjoyed include Victoria, Schütz, Charpentier, Monteverdi, members of the Bach family (including some less well-known cantatas by JS Bach) and, from more recent times, Stanford, Howells, Leighton, Britten and Morten Lauridsen.

Listen to the choir performing some typical pieces

The Ripieno Choir performs three main concerts per year, usually at All Saints’ Weston Green (‘the white church’), off Hampton Court Way. Our concert venue has been carefully chosen to provide a fitting atmosphere for the choir’s music, and an enjoyable experience for our audience.

Over the years, The Ripieno Choir has maintained its Christmas carol heritage, by singing carols  at the Thames Ditton High Street Christmas Fair, and in the pubs of Thames Ditton in support of local charities.

Recent awaydays have include Winchester Cathedral, RHS Wisley, and the Chapel of the Old Royal Naval College at Greenwich.

If you would like to join us, see further information on choir membership here.